Face Fear And Eat It For Breakfast, Like a Rock Star! 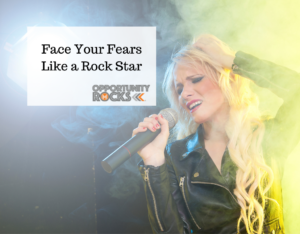 Rock stars make it look so easy. Stepping out onto the stage in front of thousands of adoring fans… it’s hard to believe that they are feeling anything but confidence.

Would it surprise you to know that some of the musical greats you love have had to overcome their own insecurities and face their fears in order to become who they are today?

Just like not everyone is born a brazen entrepreneur or a commanding CEO, not every rock star is born with a mic in their hand. So, what’s the difference between those who succeed, gracing the largest stages (and boardrooms) in the world, and those who never make it out of the garage?

Fear and what we do with it. We’ve all got it. But some people aren’t willing or able to move past it. Are you?

Overcoming your fear is like a muscle. The more you work it, the better you’ll get at it. Just like decision-making. While following these steps may take you a while in the beginning, the more practice you get, the faster you’ll move through the process. Practice makes perfect, right?

Pretending you’re not afraid of something doesn’t fool anyone, least of whom, yourself. Whatever you’re feeling is okay. It’s there and you’ll deal with it. Plus, it shows the human side to your band and others. It makes you more real. Be transparent with your fear.

Exactly what about the situation is making you uneasy? Are you afraid you can’t hack it? Are you afraid the outcome is outside of your control? Is your fear really not fear at all and it’s more about control? Humm. Give it a name. Much like the monsters in the closet, when you give them a name (and possibly add on some KISS makeup) they’re a lot less scary.

Never underestimate the power of your breath. Your breathing has the ability to work you into a panic, or the ability to bring you peace and clarity. The best part of it? The choice is entirely yours. In the beginning, you’ll want to find a quiet place to breathe. The better you get at it, the more able you’ll be to center yourself when surrounded by your team… or thousands of screaming fans. Take a deep breath (your belly should extend out as it fills with air), hold it for a few seconds, and then breathe out. Hold it for another few seconds and then repeat the process. If you’re alone, plaster a smile onto your face during this exercise. Continue until you feel your heart rate slowing and your mind becoming clearer. Similar to meditation maybe add in a mantra.

It may sound counterintuitive, but sometimes, imagining the worst possible outcome can actually calm us down. Pretend you’re a frontman (or woman) stepping out on a big stage for the first time. You may be thinking, “I’m a no-talent joke” or “I’m going to fall flat on my face out there.” By imagining the worst, you can make light of the possibilities. Sure, you might trip. But you also might get mauled by a tiger wearing a tutu. Hey, you never know! This is your worst-case scenario. (Someone could’ve brought a tiger!). The more ridiculous you get, the easier it will be to find humor and take the edge off. You can also reason with yourself. Ask what the worst that can happen, what’s the best that and happen, and then ask what will probably happen.

It’s not likely that someone brought a tiger to your debut concert. It’s also probably not likely that half of your fears will come to fruition. Examine each individual fear and then use the evidence available (past experience, your hard work, and training, your amazing team, etc.) to challenge your thoughts. It goes back to practicing. Glenn Frey of the Eagles said they never started a tour until they rehearsed their setlist one hundred times in a row perfectly. Practice equals confidence and confidence erases fear.

If you’re doing something for the first time, there’s likely to be some hiccups along the way. Embrace the learning curve and realize that mistakes aren’t something to be afraid of, but rather something to learn from. Fail fast, fail often, and fail forward. Once you understand that failure is a good thing, it to will help eradicate fear.

Yes, you may be afraid. That’s not, however, a reason not to move forward. Use fear as a GPS. Learn to thank it and thank yourself for looking out for you… and then do it anyway.

Facing your fears is the secret to success. It’s the difference between taking daily massive action and minimal or no action. Or worse yet the wrong action. When you embrace your fear and use it as a sign that you’re on the right path, you will reach amazing new heights. Rather than run from fear, run headfirst into it like a rock star and step out on the stage of business and life. Trust me it’s much better than failure, mediocracy, or going out of business. Look at it this way, there is less traffic or competition on the road to fear. Like they say the greater the risk the greater the reward. Now go get your ROCK ON!

Are You Balanced In Business Or Life? The Band You Keep

Three People You Do Not Want In Your Band
0 replies