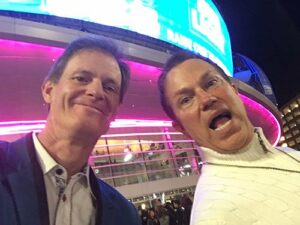 How do you control 30,000 customers?  If you’re Bon Jovi, it’s pretty easy. A few months ago my good friend, mentor, and keynote speaker coach Mike Rayburn invited my wife Jana and I to celebrate his birthday at the Bon Jovi concert in Las Vegas.  Nice invite, right?

I reference Bon Jovi in my Opportunity Rocks Keynote about his relationship with his band and how he continues to increase his fan base “aka customers” and reinvents himself.  However, his 2017 concert and record had a different feel to it.  Instead of putting on a high-energy rock show like in the 80’s and 90’s- he took us on a journey. It wasn’t long before he had all 30,000 of us mesmerized, engaged, feeling like he was our best friend and really cared about us. 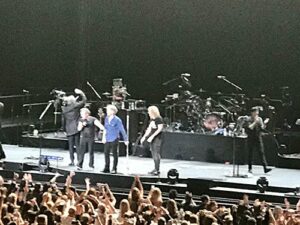 Keynote speakers want to be able to do that same thing to the audiences they speak to, but we usually only have about 4 to 5 minutes once we hit the stage to do it.  As sales professionals, we want our customers to become raving fans. Why?  Because we want more than just satisfied customers; we want loyal fans that will enthusiastically tell others about us, our products, or services. We want fans who think of us often, who will bend over backwards and put their reputation on the line with referrals and introductions. Boom, when that happens we spend less time selling and more time nurturing the relationships and watch the sales increase.

So what is the secret? Once again it’s not rocket science, It’s ROCK- IT science.
Number 1: Transparency. Bon Jovi shared some of their struggles they have been experiencing the last few years. He told stories about what inspired certain songs and what some of the lyrics meant, so when he performed them they meant something to us too.  We were on the journey, along side him.  He made reference to getting older and how that has affected their band.  He even said after a tease of some of their past hits, that he knew what songs they came to hear and promised to play them, but please listen to some of our favorites from our new record and what they mean to us and maybe you might connect with them too.

So, for our businesses we need to do the same. There are not any secrets anymore, so why pretend that there are. Be open and honest, share information of interest that they may not be expecting. Let them know the great things that are happening and why. What the challenging things and what you’re doing to overcome them. Depending on your level of relationship, you might even share some personal things. You never know when you might find something in common with that person and take the relationship to a whole new level.
Number 2: Likeability- this is key when you’re a Rockstar or a sales professional. I don’t care what kind of music you like, it’s hard not to like Bon Jovi. The guy has remained loyal to his neighborhood buddies in the band, he’s still happily married to his high school sweetheart, he supports many charities, treats his crew and band equally with respect, and the ladies seem to think he’s a good looking guy.  Did I mention he loves on his fans a lot? Hence, the long lines to buy Bon Jovi swag, sold-out shows, and the audience was engaged with their phone lights on all night. 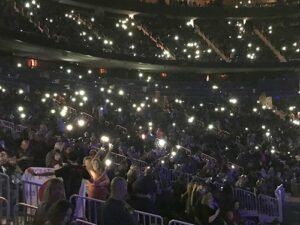 Okay, take a moment and ask yourself on a 1-10 scale for likeability- how would you rate? Or more importantly, how would your fans rate you? Do you smile a lot? Do you surround yourself with like-minded people? What does your family, team, or clients say about you to others?

When was the last time you ran a likeability test on yourself?  And remember transparency? You have to be sincere. Fans and customers are smart and can see right through you if you’re not. Just run a few Google searches on yourself and see who the Internet thinks you are. Don’t forget to check what images pop- up too.

Number 3: Hard working –Brain Tracy said, “Success comes before work only in the dictionary” Mic drop. In my opinion, Bon Jovi and Brett Michaels of Poison are two of the best and hardest working fan pleasers on stage. I performed with Brett on a private corporate show and man did he ever work the crowd. Even after his time was up and his agent was ready for him to leave, he shook every hand, posed for every picture, and thanked the crowd over and over again until the last person was gone. Bon Jovi did the same and his band did too. They connected with the bleachers as much as the people right in front. Even the section that looked at his butt all night, they would give love too. He treats every show as if it were his last. Did I mention they played for almost 3 hours? That also falls under the “always over deliver” category. When you go the extra mile, you will find you’re the only one there. Not just you, but your whole team or band too. It’s all part of the standing ovation formula. At the end, the lights came on, the crowd wouldn’t stop cheering, and the band members all hugged each other and came out for their bow. 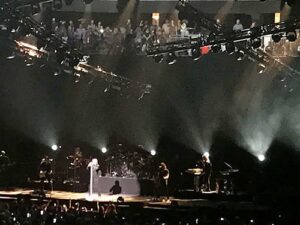 I quote Gene Simmons in Opportunity Rocks as saying, “People say we are marketing geniuses, but if we take credit for anything, we listen to our fans”. In business, when you are 100% transparent, you honor and respect everyone’s contribution to the team, your work ethic is second to none, you listen to your customers, and you and your team will have a high level of likeability.  Watch your fan base grow and your customers will be working for you. This winning formula will also create distinction, which eliminates extinction… so let’s get ready to ROCK – IT!

The Business Rockstar is an Author, International Keynote Speaker, and Customer & Engagement Guru

PS. I am going to be transparent with you right now. Last year, 85% of my keynote speeches came from referral. I always consider it a huge compliment, blessing and gift when I receive them or someone sends them to my website. So please feel free to repost, share or forward this article to any and all who might appreciate it. Thank you and Rock On!

7 Tips for Fostering the Rockstar Mindset in Business Are You An Impersonator Or A Copy Cat? 7 New Year’s Revolutions Not Resolutions for a Better Workplace

Solving The Retention & Quiet Quitting Challenges Like A Rock Star! From Transformation To Change-formation – The Point of No Return

Get Unstuck When You’re In A Rut