Imagine someone wants to impersonate you. What would they say? What would they wear? How would they act? Who would they hang out with? Would you be flattered or offended?  I attended an Anthony Robbins seminar and he said, “If you want to be successful, find someone who has achieved the results you want and copy what they do and you’ll achieve the same results.” Seems simple enough. Before I started my career as a keynote entertainer/keynote speaker,  I traveled the world as a corporate entertainer.  And part of that entertainment included impersonating certain characters. Such as, Austin Powers, Elvis, 80’s rock stars and many others. I tried to impersonate people that I admired, or who had accomplished great things. After the decision was made I would study the character, watch movies, videos of that person, and research scripts of their famous catchphrases. I would then practice and rehearse, and practice and rehearse, and practice and rehearse. As we teach in Opportunity Rocks, I would do this so much so that when I hit the stage, I felt that I was that person and I wanted the audience to feel it too.

An old acting coach told me that once you’re in character or costume to never break that character. As long as there were people around, you were in character. I have a friend who was a flight attendant for private jets. She shared a story with me about a time Tom Hanks was her passenger. And the whole flight he kept talking really funny and in a weird accent. She didn’t know why, so she asked him, “Why are you talking like that?” And he answered, “You’ll find out soon enough, Jenny.” It was about a year later that the movie Forrest Gump came out. 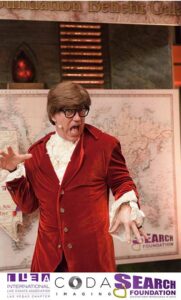 My point is this, if you are starting out in business, or you’re part of the sales organization or you’re making a plan to achieve your goals, or you’ve already accomplished your goals and it’s time to set new unreasonable goals, or when you don’t know where to start, find someone who has already achieved what you want to do, and impersonate them. It’s not rocket science, it’s ROCK-IT Science. If you can actually have a conversation with that person, be in a position to ask them questions, pick their brain, or better yet, have them be a part of your mastermind group, then you just received your standing ovation in advance. Who knows they might even agree to become a mentor. My keynote speaker friend Patricia Fripp says, “The answer is always no, unless you ask. Just be respectful of their time and do more listening then talking.”

So what is a copycat? The dictionary says: a copycat may refer to a person that adopts, copies, imitates, mimics, or follows the same thing as someone. Sounds like there is a fine line between an impersonator and a copycat. But for business purposes my definition is this;  To impersonate someone that is where/who you want to be, you have to have respect for what that person has accomplished and how he/she achieved their success. You approach with integrity, respect, and don’t steal their intellectual property.  They inspire you to be a better person in business and at home. You ask for permission in some cases. Who knows they may give you more then you ask for. Most successful people have done the exact same thing and love to pay it forward. A copycat to me is someone who approaches unethically with the intention to deceive. They actually rip the person off word for word. They are sneaky about it and do not give the proper credit to the person for their intellectual property. They are a rip off artist. 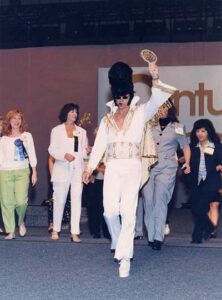 So, back to my original question, “What would it look like if someone impersonated you?” The cool thing is that you know you are doing something right or headed in the right direction if people are. Opportunity Rocks. Rock On!  “Marvelless” Mark Kamp

Please share and repost this article and let’s Rock Change. How Far Have You Come? From Transformation To Change-formation – The Point of No Return

5 Steps to Build Rock Star Energy in Your Business Four ways to make you the One & Only How Jury Duty Helps Your Business

Get Unstuck When You’re In A Rut