Can you imagine The Beatles sitting around comparing themselves to The Rolling Stones? If you paid attention to the media of their day, you’d probably say yes. (Though their supposed rivalry was nothing more than a way to get their fanbases worked up to buy more albums.) In reality, the two bands were friendly, proud of their successes, and probably recognized that to be true “rockstars,” they needed to embrace what made them unique.

If only we did that at work.

Do you ever find yourself comparing your accomplishments to those of your coworkers, friends, or family members? Of course, you do!

From an early age, we’re trained to compare ourselves to others, and as we get older, the pressure to compare gets even worse. Thanks to social media, we have a minute-by-minute window into what’s happening in other people’s lives… and it’s not healthy for anyone.

We fall into a Comparison Rut, spending our precious time questioning our path, our goals, and our abilities – all because either someone else is “doing better,” or because we aren’t where we thought we’d be at this stage in our lives.

If the Beatles and the Rolling Stones had gotten caught up in focusing on one another instead of themselves, they would’ve missed out on becoming the powerhouse musicians they became, and the world would’ve lost out on all of the amazing music they brought us.

Rather than focus on others or on this idealized version you have of your future self, why not focus on your growth? Compare yourself to who you were. Where were you one year ago? Five years ago? What about 10 years ago? Chances are, you’ve grown, developed new skills, and ascended to a higher lot than when you’d started. 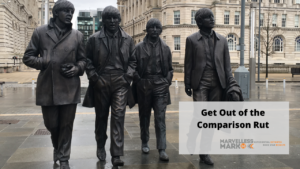 Train yourself to see the positive changes you’ve gone through. You’re a rockstar in your own right and comparing yourself to others will deprive the world of what you have to give. The only person you have to compete against is yourself.

For more tips on getting out of the comparison rut and having a peak performance mindset, visit https://www.marvellessmark.com/

“You’ve got to try and take things to the next level, or you’ll just get stuck in a rut.” – Ozzy Osbourne