It’s not difficult to identify a rock star on stage. They likely have on tight pants, flashy jewelry, big boots, and a loud hairstyle. Of course, identifying a rock star within your business is a lot harder. However, just because you can’t pick them out at first glance, doesn’t mean that they aren’t there.

Rock stars at work will show up and stand out differently than your “average” employees. Let’s take a look at their characteristics and behaviors.

They are creative and visionary. Consider the likes of Alice Cooper or Lady Gaga. From costumes to props, rock stars think out of the box or throw away the box to put on the best performance possible. And they make sure they set themselves apart from all others. A rock star employee will be constantly coming up with new ideas and new ways to implement them. Sometimes with permission and sometimes without.

They are filled with energy. A true rock star never leaves the show without at least one encore. They want to give the audience what they came for. Your rock star employees will over-deliver at every turn and surprise you with their dedication to the organization. It’s called the rock star mindset. They perform at a higher level and they think differently every day.

They are bandmates. A smart rockstar knows that he or she is nothing without their band. Legendary frontman 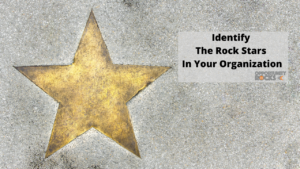 Steven Tyler of Aerosmith said, “as good as I am I am nothing without my band.” At work, this leads to loyal team members who will do everything in their power to help their fellow employees succeed. When the team wins, we all win. They know that in order to shine, they need the whole team to excel and it doesn’t matter if they get recognized or not.

They are resilient and adaptable. From the garage to the arena, rockstars are no strangers to hard times. If they folded at the first sign of trouble, they’d never make it to the main stage. Prince was booed off the stage when he opened up for Elvis Costello. Jimi Hendrix was pulled off the stage and booed when they opened up for The Monkeys. Your rock star employees understand that change is the only constant and in order to crowd surf, they need to be resilient and adapt. Rockstar’s drive change they don’t ride it.

The next time you see one of your employees ascending to rock star status, let them know. If you’d like to learn more about creating rock stars in your organization, visit https://www.marvellessmark.com/.