The business world is filled with adversity. Some break at the first sign of struggle, while others push their shoulders back, put their game faces on, and do the work necessary to survive and thrive. Like a Rock Star.

The same is true in the world of music. It turns out we can learn how to overcome adversity by looking to the musicians who became rock legends.

Lean on Your Bandmates

As the drummer for Def Leopard, Rick Allen dropped out of school to pursue music full-time. In 1984, he got into a car accident and was thrown from the vehicle. His arm was severed. He could’ve given up on music, but thanks to the encouragement of his bandmates, he retooled his drum kit as soon as he woke up and that helped catapult the band to even greater stardom.

You’re not in business alone. Lean on your team to help get through the difficult times (and don’t forget to be there for them too!). There is great power in collaboration.

Channel Your Pain into Creativity

It’s no secret that rapper Eminem had a difficult childhood. Between the poverty, the neglect, the domestic violence, and the bullying he experienced, Eminem could’ve blamed his upbringing if he’d failed in his career. But he didn’t. Instead, Eminem channeled his pain into his music, creating songs like “Cleaning Out My Closet” to vent his frustrations and resonate with people worldwide.

Sure, you could blame your past if you’re not where you want to be. That is a victim mentality that comes from a closed mindset. You are living in the gap. Or, you could be grateful for what you’ve been through because it’s made you who you are today. You reframe your past and look back to see all the positive blessings that came from that past pain. That is a growth mindset. Or living in the gain. 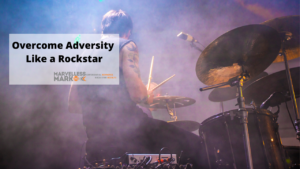 While the name Tony Iommi may not be familiar to you, the band Black Sabbath ought to be. At 17, this guitar player lost the tips of his middle and ring fingers while working at a sheet metal factory. While he toyed with the idea of quitting music, he chose to create a brilliant solution. He made caps for his fingers using plastic bottle tops and leather and then used lighter gauge guitar strings to protect his fingers further. That is a Rock Star Mindset.

When you face a challenge, be solution-focused and find a way to adapt and innovate. Those of us that have been on tour for many years have learned to look forward to unexpected things happening. What doesn’t kill us makes us stronger and remember those lyrics? We look forward to those opportunities for growth. Think I’m crazy? Look how far we’ve come and look how fast we were able to learn and pivot and embrace new ideas creativity and Technology when the pandemic hit. Before that it was the real estate busted 2008. Before that it was 9-11. Do you see where I’m going? At first, I was afraid I was petrified. Now I say bring it on.

If you want to be a rockstar in business, look to music for your inspiration. For more tips, visit https://www.marvellessmark.com/. How to Boost Sales Team Morale and Motivation Reducing Turnover to Improve Teamwork in the Workplace The Band You Keep How to Create a Culture of Employee Engagement 7 Ways to Improve Employee Morale by Having More Fun

Who Is Your Robert Plant?
0 replies