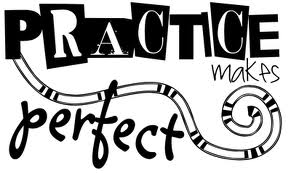 I have a friend who once worked with the Eagles. Glenn Frey told him that they never played a song at a live concert until they had played it perfectly 100 times in a row during rehearsals. Hard to believe? Well, it is certainly hard to emulate, but it demonstrates a rock star level of dedication and preparation. Anybody might get a lucky break, but you don’t get to be the best by accident. A tight sound comes out of consistent, disciplined rehearsal. Each member is accountable for staying limber on his own instrument, and for following through on the responsibilities he is given. Then, when you come together as a team, everyone will be prepared for the work that needs to be done.

Imagine what it would be like if you all practiced your best PowerPoint presentation 100 times in a row. Your sale calls? What if you practiced the protocols for your software beta test? What about your responses to questions in a debate? You would be more confident, better prepared, and more poised. Consider the benefits of rehearsing a facility tour of your building while preparing for an important visitor. Imagine how much smoother Christmas morning might go if you and your kids practiced what to say to Grandma when they opened their presents!

There are two basic lessons here: