Have you ever wondered what separates the rockstars from the one-hit wonders (and how can you apply that to your team at work)?

One-hit wonders see life as though the best is behind them. They reach the top of their game and can’t comprehend that life will get better from here.

Rockstars, on the other hand, know that if they work hard and continue to learn their craft, the best is yet to come. The personal growth world cause that’s the difference between a growth mindset a fixed mindset.

Consider your team. If you’re a leader, you’ve got a team of employees who fall into one of these two camps… either they wowed you once and you’ve been hanging on to the hope that they’ll eventually do it again, or every day, they show up stronger, better, and even more of a rockstar than the day before.

How do you identify whom you’ve got working with you?

It turns out the number one indicator of success is what you do in the face of failure. When one of your team members experiences a setback, do they throw their hands up and say, “I’m done!” or do they pick their head up, push their shoulders back, and find another way to reach their goal? 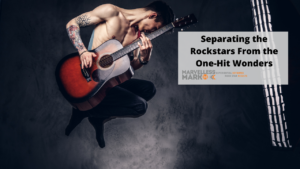 “Show the universe that it can’t take your dream from you.”  – Machine Gun Kelly

Just because you’ve got a one-hit wonder in your midst, doesn’t mean it’s time to send them packing. As a leader, you have the power to motivate them toward greatness.

How? Change the way they look at failure.

Did your team try something new? Don’t let the celebration hinge on whether or not it worked, but rather that they stepped out of their comfort zone and thought bigger. Sara Blakely, founder of Spanx, fondly remembers being asked one question by her father every single day: “What did you fail at today?”

For her, it reframed failure from “not succeeding,” to “not trying new things.” When you adopt this question with your team, you encourage them to think outside the box and get creative, without the fear of failure. As long as they don’t quit, their efforts will pay off in the long run and you’ll have a team filled with rockstars.

For more information on creating rockstar employees, and the difference between a band with a growth mindset and a band with a fixed mindset, visit https://www.marvellessmark.com/